Now we are open all year! And a nice and ambitious Dutch & Thai serviceteam is looking forward to see you here ! 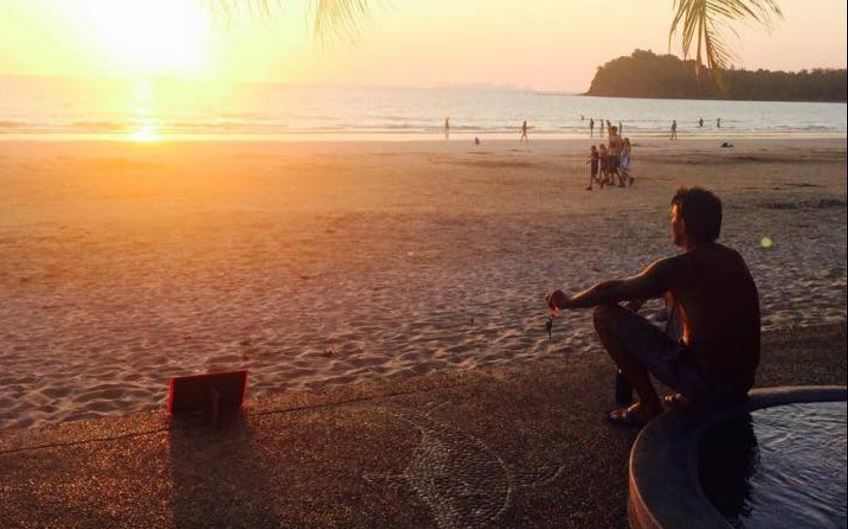 This island forms the most southern district of Krabi province. It was known long ago by its name in the Malay language, Pulao Satak, which means Long Beach Island. Later, so many Thais, both Buddhist and Muslim, came to live on the island that there seemed to be a "million eyes", which is what some people think "Lanta" means in Thai. Others told that the name is corrupted from Javanese "lan-tas", and means a fish's grill (which is built of wood with a square grill on top where the fish are set in a circle.)

Ko Lanta Yai is geographically mountainous and rugged, especially near the southern tip; some beaches are gravelly, others have fine white sands. First in 1996 a power line from the mainland was established and in 2001 they followed up with a phone line. A car-ferry-service, introduced in 1996, is connecting the two islands with the mainland. Since 2002 the new concrete-road is in work and will surround the island, soon. In the late Eighties, the first bungalows opened up the island to tourists.

Laguna Beach Club opened up it's doors the first time in 1997.

Local festivals and rites :
The setting adrift of the "Chao Ley" ( sea-gypsy ) boats takes place on Lanta Island during full moon of the sixth and eleventh month in the lunar calendar. This is a religious rite performed by sea gypsies who gather on the beach near Ban Saladan village.

Ko Lanta Noi has so far no tourism at all. The locals are mainly farmers and fishermen who live in the traditional way without the influence of the western way of living. This amazing world you may discover during a tour with motor-bike, car or boat.

Lanta island is Asia's best kept natural travel secret. This tropical paradise off the south-west coast of Thailand offers 25 km of deserted beaches backed by verdant jungle & rainforest. On Ko Lanta you still find real big trees, many animal species, like rare birds, mammals and reptiles. They dance their famous "rong ngeng" round the boats to be set adrift.

Ceremonies feature singing and dancing. The reason for the festival is to bring prosperity and happiness to the participants.

The mangrove coast in south Thailand, covers sinking limestone ranges, millions of years old. On Koh lanta there are many mangroves, which you can admire while going on a canoe-trip. Mangroves and intertidal mudflats are of great conservation value in Thailand, helping sustain valuable inshore fisheries and protecting the coast from erosion.

Below the water level, the mud and the roots give shelter to a plethora of marine life, Including fish, crabs and molluscs.

If you arrive by car ferry, than watch out for monkeys, which are living here in the mangroves. They are crab-eating macaques and one of the numerous mammal species living in this environment.

Nature for a living, rubber tree and palm tree plantations:

On Lanta you can find many rubber tree plantations, which are tapped each day before sunrise. The rubber then has to be dried, cleaned, and pressed. The liquid of about thirty trees makes one kilogram of rubber which is sold to factories for about US$ 0.50 . Coconut palms and oil palms are common on Koh Lanta as in the whole south of Thailand and they provide a modest income for the local farmers.

Ko Lanta's rich waters offer sandy coves, coral reefs, limestone rock outcrops, rock reefs, seamounts and pinnacles, undersea caverns and tunnels and sunken ships.
Water temperature ranges from 27 to 31 degrees - ideal for scuba-diving, corals and tropical fishes. More than 200 hard corals and 108 reef fish species have been catalogues in a study under way, but thousands more organisms around, too. The twin peaks of Hin Daeng and Hin Muang are rated in the world's top 10 list of dive sites.

Koh Lanta is perhaps the most idyllic area available in Krabi province. Offering travelers something that is increasingly difficult to find on Koh Phi Phi or Pranang: peace and quiet. Koh Phi-Phi is a good reminder of how too much development can spoil the natural beauty of an island.

While tourism has grown quickly in the last few years, Ko Lanta has retained its traditional charm and great natural beauty.
Koh Lanta has a magical soothing effect on visitors - many people arrive planning to spend a few days and stay for weeks and even months enjoying the friendly relaxing ambience.

Check out our tour-desk for more information and suggestions on what to do and se on the lovely island of Koh Lanta!

∼Your journey starts here, there is a paradise waiting for you∼